Imagine, if you will, the convention center in Philadelphia, right next to Reading Terminal Market, over-run with fairies. Urban Goth fairies in black tulle and striped stockings and Doc Martens. Flower fairies in green silk and sunflowers. Tiny fairies in pink onesies and minute wired wings. Greenmen by the grove. Gentleman fairies in top hats and cutaways. Fauns. Nymphs. Dryads. Fairy godmothers and their godchildren. All strolling through the Philadelphia streets on a beautiful October weekend, trailing wings and silk and bells and flowers.

OK, you don't have to imagine. I took pictures. Not many, because I was having too much fun running around watching the guy at the ear wrap booth attach elf ears to young and old and trying on masks and being on panels and listening to Brian and Wendy Froud talk about art and magic and the fairy world. But on the theory that a picture is worth a thousand words, and I'm short of time just now, here (if this attachment thing works) are my three favorites. 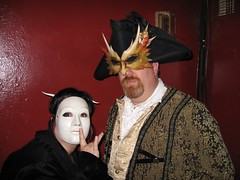 As you can see, everyone had a wonderful time. There was a Good Fairy Ball. There was a (much bigger) Bad Fairy Ball (and what does that say about the relative sartorial possibilities of goodness and badness, eh?). I wore my crafty friend's hand-dyed silk Luna Moth wings to both of them, over green velvet for Good and with a black bustier and a Lady Hamilton-like wig for Bad. There were fairy fashion shows, presenting a new line of fairy god-mother wear designed by Wendy Froud and made by Gypsy Moon. There was Ellen's Thomas the Rhymer show, with fiddler Joe Kessler (which I couldn't go to because I was on a panel at the time). There were book signings and friendly dinners and many LJ friends met and greeted. There was even some writing, in a little tea room serving matcha lattes and Japanese green-tea sponge cake.

I'm already looking forward to next year. And soon now, very soon, I'll be sending pictures to the people I've promised them to.

OK, it didn't work exactly as I thought it would. Maybe this time, it'll work better. 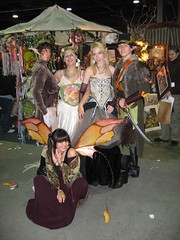 This is what I've been calling the Faerie Court--5 young people who more than looked the part. Some of them knew each other before, but I think the final configuration happened at the con. They are Bonnie Scott, Paul Marlowe, Danielle, Drew Fairyone, and Katerina Korolov, and they certainly made my day.

This is Wendy and me--at the Bad Fairies Ball, of course. Wendy looks more like the Fairy Who Can Be Snarky Occasionally. I look more like Lady Hamilton Risen From the Dead, which will teach me to wear bright red lipstick and a black curly wig. The moth wings are courtesy of 29 rue St. Sulpice (which should have a website at some point). They have long curly tails down the back.

Why I can't get more than one picture up at a time, I haven't the slightest idea. No doubt it will become clear in the fullness of time. In the meantime, though, here's the picture of Wendy and me. Hardly worth waiting for, but I did promise. 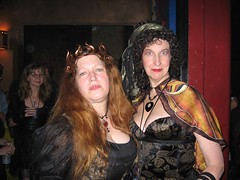